The Special Operations Executive in Burma 1941-1945

The Operations of SOE Burma

The aim of this page is to provide a list of all SOE operations into Burma, with some brief details about them.

Operations launched by SOE’s India Mission but not into Burma, eg the Andaman Islands (Operation Baldhead) or the attack on Axis shipping in Goa (Operation Longshanks) will not be listed.

A ‘(B)’ indicates that the operation is included in my book. 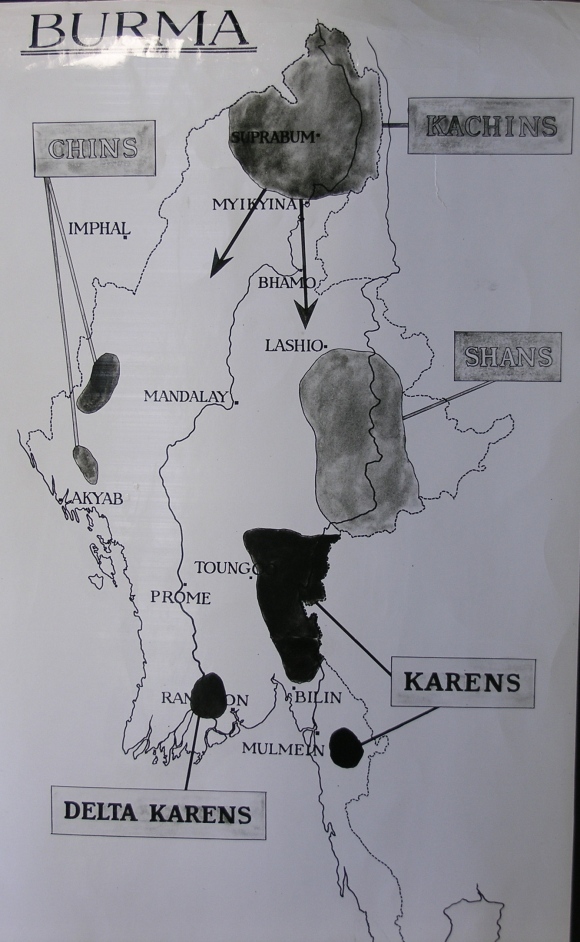 Originally intended to be a British Officer (Major Percival Lovett-Campbell) +4 in the Kachin Hills.  Instead, the party was diverted to provide a reception party of Wingate’s second Chindit operation codenamed Dah Force.  See my post ‘SOE & the Chindits: ‘stormy relations’.

This operation aimed to get an agent on to Ramree Island.  The agent, codenamed BBR/71, from a village on the island, was to be accompanied by BBR/34.  Their mission was to spread rumours, drop leaflets, and organise a network overland into the Bassein area of Burma.

Started in November 1943 as a plan to contact Burmese nationalists belonging to the Thakin Party.  The operation grew into three parts:

The Arakan operations were used as the test case for the later operations into central and lower Burma.  The Nation part of the Billet operation became one of the biggest and well known of SOE/Force 136’s operations into Burma.

Similar to Rendezvous, this operation was tasked with providing intelligence to the immediate front of XIV Army as it advanced into Burma in December 1944.  In particular, the operational instruction indicates that traffic on the Tilin/Gangaw and Tilin/Pauk roads were to be monitored and attacked when ordered, and to locate a Japanese Light Tank Brigade thought to have been in the Pakkoko-Monywa-Pauk area.

Proposed to P Division on 1 July 1944, for this operation two agents were to be dropped into the Bhamo area with a number of tasks to fulfil.  These included the planting of explosive ammunition (Natterjack), recruiting agents to be sent ot India and contacting the Burma National Army with a view to ‘influencing them to our side.’  This operation was ‘subject to consultation with Lt.Col. Peers’, who was by then in charge of Detachment 101 of the OSS.

A plan to contact the Karen living in the Irrawaddy delta area.  This operation was contested by the Civil Affairs Service, Burma, (CAS(B)) on the grounds that the delta area had always been prone to crime and therefore restoring order after an additional distribution of arms would be extremely difficult.  In addition, the Burma Independence Army (BIA) had, in 1942, committed atrocities against the Karen population, so CAS(B) argued that arming the Karen would simply lead to more communal violence as they sought to ‘pay off old scores.’

Patrol groups of Burmans and Karen under the command of (then) Major Edgar Peacock and Major Eustace ‘Pixie’ Poles.  Operating to the front of General Gracey’s 20 Division, P Force was in the field from November 1943 to May 1944.

Launched on 31 January 1944, this operation was one of the few seaborne infiltrations of Burma Country Section.  The teams went ashore on Elphinstone Island to keep watch on Japanese shipping in the Bay of Bengal.  The operation ran until October 1944.

Proposed mission to the Shwebo area to provide over-sight of the Shwebo to Kalewa road.  The personnel were to be Burman, and be laaunched in December 1944 in support of Operation Capital (XIV Army’s advance into Burma).

The plan to send a group of four Anglo-Burmans on a vessel to the Rangoon River in March 1943 with the intention of sinking a Japanese boat of up to 3000 tons in the vicinity of Elephant Point.  It was hoped that this would block the channel and so cause the Japanese a problem with supply.

The ‘Operational Instructions’ for Mole are dated 27 February 1945, but other documents reveal that this plan dated back to at least April 1944.  In this earlier incarnation, two Karen with W/T were to be dropped in the Mergui/Tavoy area of southern Burma to contact Karen and Chinese communities.  The initial drop was ‘essentially a recce party’ for a subsequent infiltration of ‘Pandas‘ (Chinese agents).

The February 1945 instruction details three Karens to move into the hills and report intelligence, find suitable DZs and prepare to receive stores and personnel in the next moon period.

This was SOE’s first parachute operation into Burma, launched in January 1943.  Karen personnel were dropped into the Bassein area of Burma to contact the Karen community there.

(B) Hainton, later Heavy with teams Lynx, Wolf and Calf

Operating in the Wa states near the Siamese border, the first team set out to reach their area of operations in March 1944.  Like their colleagues on Operation Spiers 200 miles to the north, the Hainton team encountered considerable obstruction from Chinese allies.

In February 1943, the first team of Harlington was dropped into the Karen Hills with the aim of contacting ‘Blackbird‘ (Major Seagrim) who had remained behind the lines in 1942.  Two British officers were dropped in October and December 1943 to join the first group.  By April 1944, the news reaching Calcutta was that the teams had been arrested by the Japanese.

Harlington was later revived as Character in February 1945, and became SOE/Force 136’s best known operation.  The four main sub areas of this operation were, from north to south, Walrus, Otter, Hyena & Mongoose.

A 1943 plan to contact Karens in the Rangoon and Bassein area with the object of ‘dislocat[ing] the social and economic order established by the Japanese in Burma at a time to render the maximum assistance to the Allied forces in effecting the destruction of the Japanese Armed Forces.’  An immediate objective was sabotage of railway and shipping.

Originally to have been a party of three, but they ‘gibbed at the very last minute’ in May 1944.  On 29 June 1944, therefore, a single ‘Panda‘ (codename for a Chinese agent) called Li Jui was parachuted into Burma to investigate the suitability of sending further personnel into Mandalay to contact the Chinese community.  It took until 5 September to reach Mandalay, where he stayed just a week because visitors had to report and were under suspicion.  Li Jui eventually made it out to friendly forces on 22 January 1945.  Quite a remarkable story here – see my blog entry here for more.

Three parties of Chins to be deployed in the Arakan covering the road Taungup to Akyab in January 1945.

Similar to Brancaster, this operation was proposed to P Division on 1 July 1944.  This time, the plan was to parachute a single agent into the Katha area of Burma, also in consultation with the OSS.  The objectives of the operation included the distribution of Natterjack (explosive ammunition), contacting the Burma National Army and sending recruits out for training in India.

An operation intended to foment trouble amongst the Indian dock workers in Rangoon by infiltrating Communist Indian agents.  There were two Mahout parachute drops.  The first was on 15 June 1943 and the second on 13 October 1943.

The aim of this operation was to put a Special Group on the Yamethin-Thazi-Kalaw Road to attack the Japanese forces using this line of communication.  The team was inserted on 23 January 1945, commanded by Major Smythe.  The party landed safely, made contact by W/T, and then never came back on the air.  By 10 March, some survivors made it back to Allied lines and the details of what happened began to unfold.  Major Smythe and Captain Meredith are amongst the handful of British officers of SOE Burma who were KIA.

Overbowl was proposed to P Division on 1 July 1944.  The plan was to drop a single agent in the Myingyan area, with the same objectives as Brancaster and Kingshead.

An additional aim was to try and ascertain what had become of Mahout personnel.  On 13 October 1944, Maung Nyein Maung was sent overland ‘via IMPHAL down CHINDWIN’.   This operation was part of the Billet / Grain operations.

With the same objectives as Overbowl, Kingshead and Brancaster, this operation aimed to parachute an agent into the Siu District.

Launched on the night of 23/24 January 1945, the purpose of Ramrose team Rhino was to provide a reception party for a Special Group to be flown in later, and to report targets on the Minbu-An road.  This road connects the Arakan to central Burma, and so was the natural line of retreat for Japanese forces facing Christison’s XV Corps.

The Special Group was never dropped because the party landed 40 miles from their intended DZ, and had to go on the run from local Japanese forces.  Rhino stayed in the field until May, however, directing airstrikes on the road as planned and fighting with Burmese Nationalist forces.

A patrol group which operated in the area to the front of XIV Army as it advanced towards the Irrawaddy in December 1944.  The objectives were to provide intelligence on Japanese dispositions and sabotage their line of retreat in the Wuntho area.  The patrol was extracted by Dakota on 11 January 1945 having successfully avoided being caught in several ambushes and led a platoon of the Royal Berks over the Mu River.

An operation focused on the Kokang area of north east Burma.  The first Spiers team eventually got to Kokang in December 1943, but was withdrawn by September 1944 having achieved very little.  This was due to friction with Chinese allies, and to a lesser extent the Americans too.

Originally launched in March 1943, and remaining in the field until the end of hostilities, Dilwyn worked with the Kachins in northern Burma.  Apart from providing much useful intelligence and helping to recover downed USAAF pilots flying ‘The Hump’, the operation also supported the Chindits.  The American OSS operated in northern Burma with the Kachins, which caused some friction between allies as they competed for recruits to pursue divergent strategies.

October 1944, two Chinese agents dropped into the Rangoon area.  Both were killed due to parachute malfunction.  The original party of three agents had refused to go by parachute in May 1944.

Winterton – a political warfare (PW) operation destined for the Arakan in mid 1944.  The operation was described as a ‘still-borne baby’ after the Burmese personnel got cold feet and refused to go.

SOE in Burma by Dr. Richard Duckett is licensed under a Creative Commons Attribution-NonCommercial-ShareAlike 4.0 International License.
Based on a work at <a href="www.nationalarchives